Do You Carry Taltish Stone?

We generally carry Taltish “Heavy Chiseled” stone in a variety of colors and sizes. We have the ability to make it in our shop including finished corners and edges. It is a good idea to check with on regarding what raw material we have available at the moment.

What is Jerusalem Stone?

Jerusalem Stone is a generic term describing natural stone material coming from areas from the Jordan River on the east to the Mediterranean Sea on the west, and from the southern Port of Eilat on the Red sea to The Galilee and Haifa on the north. This natural stone that we import is a dolomite-limestone.

Jerusalem Stone is a type of dolomitic limestone that is quarried around Jerusalem and other parts of Israel.

Where Is Jerusalem Stone Quarried? 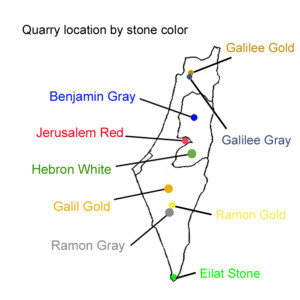 This map  shows the approximate location of Jerusalem Stone quarries in Israel. There are many individual quarries located throughout the country and each has it own character.

If you have any questions about a specific material please contact us and we will be glad to help.

What Is Dolomite Material?

Siliceous stones are composed of silica (SiO2) particles and are very durable. Examples are granite, slate and sandstone.

Calcareous stones are composed mostly of calcium carbonate and are softer than the siliceous materials. Examples are marble, travertine and limestone.

JerUSAlem Stone is a dolomite which falls in the calcareous stone catagory. Dolomite stone (or Dolostone) are those which contain more than 50% carbonate minerals of which over half are dolomite minerals (calcium-magnesium carbonate). Dolomite is considered carbonate rock.

Although modem seawater is supersaturated with respect to dolomite, dolomite is not precipitating directly at an observable rate. Dolomite is found in modem sabkas, peritidal environments, and in some deep-sea sediments (Carballo et al. 1987, Lumsden 1988, Tucker and Wright 1990). Dolomite formation is controversial and many models have been proposed. Popular models for dolomitization include burial dolomitization, meteoric-seawater mixing, dolmitization by normal seawater, and evaporation of brines. Most models include seawater because it is the only known major reservoir to contain the amount of Mg required for dolomitization (Purser et al. 1994). Although some direct precipitation of dolomite is thought to occur, the majority of dolomites, in particular the massive dolomites of the Paleozoic are believed to be the result of replacement of calcium carbonate by dolomite (Sibley et al. 1994). The latter involves two steps, the dissolution of calcite and the precipitation of dolomite as indicated by the following reactions:

In modem sabkas, the periodic influx of seawater acts as a source of M 2+ f or dolomitization. The precipitation of evaporate minerals increases the Mg2/Ca2 ratio, a factor known to promote dolomitization (Baker and Kastner 1981). Mixing of meteoric water and seawater has been suggested for dolomitization by Badiozarnani (1973). He indicates the mixing of proper proportions of the two fluids can generate a nixed fluid which is undersaturated with respect to calcite and supersaturated with respect to dolomite. Although evidence of this model has been found in Jamaica (Land 1977), it is generally not accepted as an explanation for the massive dolomites (Sibley et al. 1994). Evidence for the occurrence of dolomitization by normal seawater was found at the Enewetak atoll (Sailer 1984). Whether the minor amounts of dolomite found in deep sea sediments is the result of dolomitization by normal seawater has not been determined.

The problem of the origin of natural dolomites is further complicated by the fact precipitation of dolomite at ambient conditions in the laboratory has not been successful. Experimental studies involve the precipitation of dolomite at temperatures greater than 100 O celsius and abnormally high saturation states which do not represent modem marine environments. However, catalysts and inhibitors for the dolomitization reaction in the laboratory are consistent with petrographic observations of natural dolomites (Katz and Matthews 1977, Gaines 1980, Choquette and Steinen 1980, Mackenzie 1981, Baker and Kastner 1981, Sibley 1982, Bullen and Sibley 1984, Gregg and Sibley 1984, Saller 1984, Middleburg 1990, Fouke and Reeder 1992, Sibley et al. 1994). Catalysts for dolomitization include an increased Mg2/Ca2 ratio in the parent solution, increased temperature, aragonite substrate (instead of calcite), and increasing surface area of the substrate (Katz and Matthews 1977, Baker and Kastner 1981, Sibley and Bartlet 1987, Sibley 1990). Sibley et at. (I 987) proposed the division of the dolomitization reaction into an initial slow step, the induction period, followed by the rapid replacement of the substrate by dolomite. Further work by Nordeng and Sibley (1994) indicate the reaction proceeds through a series of metastable products progressively increasing in Mg. Sibley et al. (1994) proposed the length of the induction period as an explanation for the lack of marine dolomitization.

Limestone rocks are those which contain more than 50% calcite (calcium carbonate) mineral. Extensive karst forms in limestone areas as the minerals react chemically with dissolved carbon dioxide and organic acids. Although limestone is slightly soluble in water, the reaction with carbonic acid appears to be the primary solution reaction. – Although calcite is usually the most abundant mineral, other common minerals include aragonite, dolomite and magnesite (magnesium carbonate). Impurities, which tend to inhibit or slow down karstification, include chert, flint, authigenic (formed in place) quartz and feldspar, and clay minerals. Limestone is considered a carbonate rock.

Dolomite rocks (or Dolostone) are those which contain more than 50% carbonate minerals of which over half are dolomite minerals (calcium-magnesium carbonate). Because many dolomites appear to form by replacement of limestone the rocks are usually crystalline. Although dolomite may be slightly soluble in water, karst will form in dolomite areas as the minerals react chemically with dissolved carbon dioxide and organic acids. Although calcite and dolomite are usually the most abundant minerals, other common minerals include aragonite and magnesite (magnesium carbonate). Impurities, which tend to inhibit or slow down karstification, include chert, flint, authigenic (formed in place) quartz and feldspar, and clay minerals. Dolomite is considered carbonate rock.

Marble consists of metamorphosed limestone or dolomite or both. Although marble may be slightly soluble in water, karst will form in marble areas as the minerals react chemically with dissolved carbon dioxide and organic acids. Marble may be associated with contact or regional metamorphism where phyllites, slates, schists, and metaquartzites may be found. Marble is considered a carbonate rock.

How does Jerusalem Stone compare with Marble?

Marble consists of metamorphosed limestone or dolomite or both. Marble is considered a carbonate rock.

How Much Absorbtion By Weight, Density, Flexural Strength?